Skull tattoos have always been one of the most popular tattoo designs, and with how common the skull is as a symbol in everyday life, it’s little wonder so many people decide to permanently ink it into their bodies!

Way back in the day, skulls symbolized the things that they were literally associated with– death, disease, decay, and murder. Today, however, many skull tattoos can represent a wide variety of things, with many of them being exactly the opposite of death and decay. This once-negative symbol is now often put in a positive light, and the meanings attributed to skull tattoos are as varied as the tattoos themselves.

The popularity of skull tattoos runs all the way back to the days when tattoos were strictly for sailors, and now that more people are getting inked, this tattoo design is taking off. Depending on the wearer’s beliefs and background (and on the design itself), the meaning can be any one of a number of things. For some people, skulls represent infinity or life after death, because the human skeleton lingers on long after they believe the soul has departed for another destination. For others, a skull tattoo may be a way to symbolize closed doors– someone or something in their life that they have given up and can no longer revisit (in essence, that part of their life has died and cannot return). Other common skull tattoo meanings are survival through hardship, strength, power, or mourning. As with most other symbols, the true meaning of the skull varies based on the design of the tattoo itself— what other symbols are combined with it, how is it placed, how does it look aesthetically, etc. 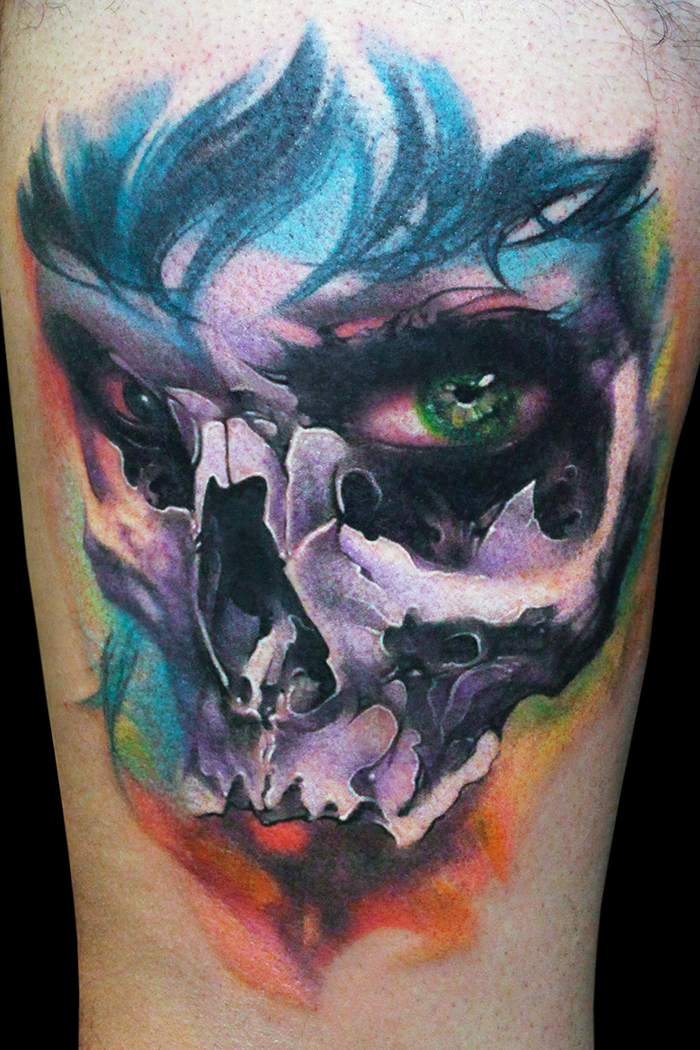 No discussion of skull artwork would be complete without touching on sugar skulls as a symbol. To people who observe (or admire) the famous Mexican holiday, The Day of the Dead, a sugar skull is closely tied to the central themes of the holiday, which focuses on remembering and celebrating friends or family who have passed away. Since this is a holiday that celebrates the dead, a person with this type of skull tattoo may find it to be a very positive, playful symbol, rather than one of loss and mourning. Popular sugar skull tats are usually brightly colored, and they are often done as a tribute to a specific loved one who has died.

Skulls are often paired with another popular tattoo design: flowers. Depending on the flower and the positioning, meanings vary, because different flowers stand for a variety of different things. Sometimes this juxtaposition represents the contrast between life and death, or if the wearer has chosen to pair the skull with roses, it may be another tribute to a lost loved one.

This particular tattoo symbol was usually associated with men, but in modern times, women are just as likely to get skull tattoos as their male counterparts! It’s becoming very common to see women sporting ‘girly skulls’ on their arms, dolled up with flowers, hearts or ribbons. Because the skull tattoo is so versatile, it can mean almost anything, which makes it an appropriate design for just about anyone. That’s why it’s become so popular!